LAL MAAS is an iconic dish from the desert state of Rajasthan in India. The name literally translates into “red meat”. Exactly when the dish came into existence is not clear but its origins can be traced to both the dynasties of Jodhpur and Udaipur that have ruled since the 7th and 8th Centuries. It is quite likely that this was a more refined version of the famed “Jungli Maas” or wild meat which was a dish that was developed by the cooks of the Maharajahs when they were out on a hunt. The meat was cooked with copious quantities of chillies and ghee to disguise the gamey smell of the carcasses. It is likely that once the dish began to be cooked in royal kitchens back at the palace, other ingredients were incorporated to give it a more sophisticated taste. But as is the case with a lot of Indian cuisine, royal recipes are better documented than recipes that evolved in ordinary people’s homes. So we do not know whether there was a common version of Lal Maas and all we have is the royal story to go by.

Until recently, Lal Maas was not well known in other parts of India and a number of myths remain about the kind of meat that should be used, the type of chilli, the type of oil, whether or not tomatoes should be added and to smoke or not!

After carrying out research through a variety of old cookbooks, interviews with chefs and Rajasthan royalty as well as online articles, I have gleaned the following information which busts a few myths about the way it is prepared.

• First the fat in which the dish is cooked. There are two versions of Lal Maas in Rajasthan – in Jodhpur, it is cooked in ghee and in Udaipur it is cooked in mustard oil. Unrefined mustard oil from the first pressing is the preferred kind of oil in this case. Although mustard oil is widely available in Asian shops in the UK, it always comes with a warning that it is for “external use only” i.e. not meant for human consumption. It is thought that the high erucic acid content poses a serious threat to human health. In fact is is banned for edible consumption in the US, EU and Canada. How then have generations of north Indians flourished on a mustard oil based diet? Perhaps it is the way it is treated and the foods it is consumed with – we certainly need to know more.
• The type of chilli used in Lal Maas is Mathania chilli which is cultivated in Jodhpur. These chillies are hard to come by in the rest of India, never mind the rest of the world. A handful of spice merchants have started trading them through Ebay in the UK. The distinguishing feature of these chillies is that they impart a deep red colour without too much heat. They also have a distinctive flavour. The closest substitute that I have found which is relatively easy to procure is whole Kashmiri chilli. There are other mild chilli varieties in India such as Byadgi chillies or Deggi chillies which could also be used.
• Lal Maas is made with goat meat – not game as many people believe and not with sheep meat or lamb either. While recipes call for mutton this is the term that is used to indicate goat. Game such as wild boar and venison was used in the preparation of Jungli Maas but this changed to goat as the dish was domesticated. In any case hunting of wild animals was banned in 1972 under the Wild Life Conservation Act so for most Indian people that is no longer an option.
• Another point of debate is whether or not tomatoes are used in the preparation of Lal Maas. Some say an emphatic No!! – the only souring agent used is yoghurt. and yet, the recipe from the kitchens of the Maharaja of Jodhpur does contain tomatoes.
• Whether or not Lal Maas should have a sauce is also hotly debated. The Udaipur version appears to be relatively dry whereas the recipes from elsewhere show a sauce.
• Finally there is the question of whether the meat should be smoked or not. The Udaipur recipe calls for smoking using the Danghar method which I describe below.

I decided to make this with mustard oil A la Udaipur. I found the recipe written down by Chef Kunal Kapoor who had obtained it directly from the Khansama of the Maharana of Udaipur. Here it is with slight modifications from my side. The resulting dish was sublime so do give it a try.

Method:
Heat the oil to smoking point. Switch the heat off and cool. Reheat on a high setting and add the cloves. Stir for 1-2 seconds and add the onions. Let these brown and then add the meat. Brown on all sides and fry until the oil separates. Add the chilli paste and stir to coat the meat evenly. Add the whole chillies. Next, add the yoghurt a couple of tablespoons at a time and stir until incorporated. This is to avoid it splitting. Add half a cup of hot water and leave to cook until the meat comes away from the bone easily. The meat can now be smoked. Hold the piece of charcoal on the gas flame with a pair of tongs until it glows red. Place a small steel bowl on the meat and put the live charcoal in it. Pour the ghee directly on the charcoal. It will immediately release a lot smoke. Put the lid back on the meat and remove five minutes later. The smoke will have infused the meat to give it a beautiful smoky flavour. Serve the Lal Maas with hot rotis. 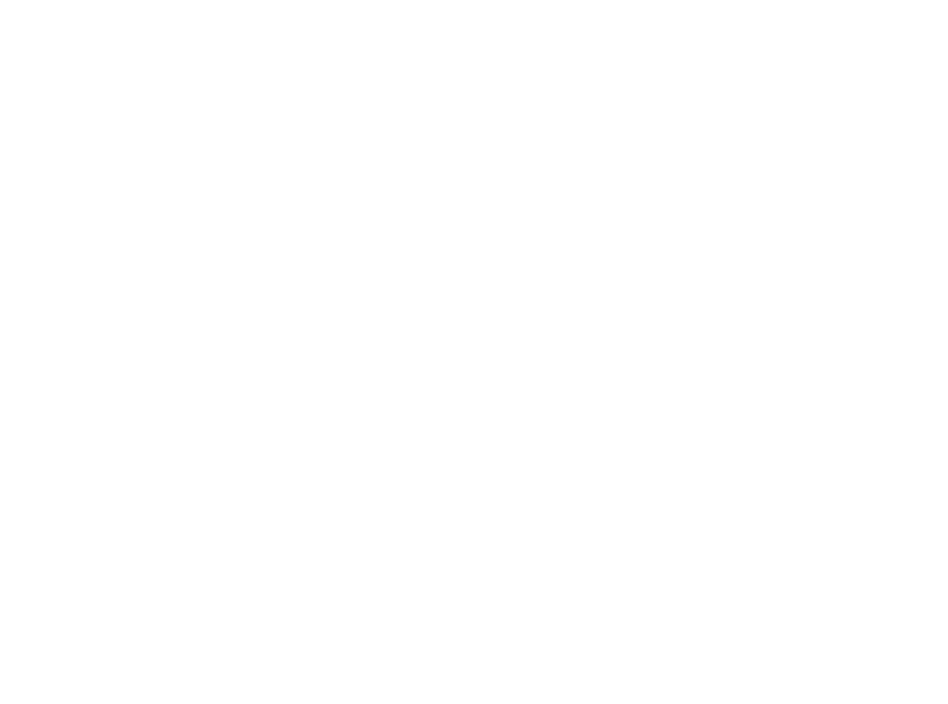 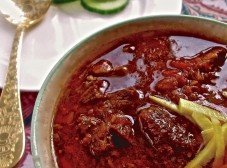 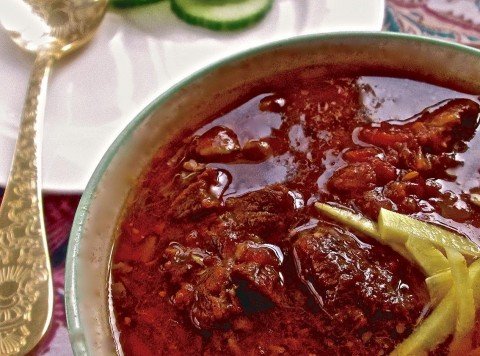